This is the first 7 String guitar we’ve made in a long time. We made quite a few 7 strings in the early 2000’s, but many years have passed since the last one. Then, last year at the GFA festival in Denver, Matanya Ophee asked me to make one for him. Matanya and I have known each other for a long time. He was looking at the guitars we had on display and he said “These look pretty good but there’s something missing.” Yep, missing one string. Ok.

So we dug into our old notes and molds and jigs and made one for him. We had to reinvent some of it, R&D, and I think it came out quite nice. Matanya specifies a particular tuning, a “Russian” tuning which is dgbdgbd. It has a great resonance in that tuning. Of course, even in some more familiar tuning I’m personally thrown off when it comes to playing a 7 string. Even the addition of just one string requires some serious relearning for me. Still, it sounds wonderful in any tuning.


And this is cool. We are planning to make another one soon, hoping to get accustomed to it, and making it a regular offering. I know there is a whole group of Brazilian and other jazz players —as well as classical players — that are good with 7 strings. I’m not, but then I still have my 6 string beauties!

Coincidentally we are also making a very different style of 7 string for John Dearman of LAGQ. This one is even more of a challenge because the seventh string is extended by 2 frets, something developed by Tom Humphrey, Greg Beyers and some other builders. This new guitar is already built and just beginning to be French polished. We’ll see how that turns out in a couple of months. Should be good.

If any 7 string players have any comments please send me an email. I’d be grateful for some input. I don’t know how much demand there is out there, but it’s something we are developing, the designs and skills for production. Who knows? It might be the next thing! 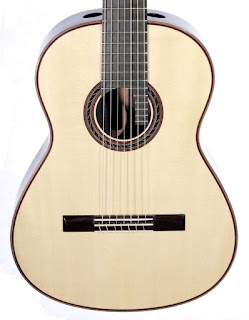 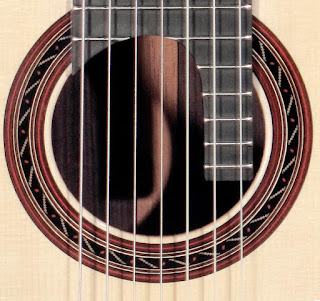