Just when you think you've seen it all, a quick slap in the face comes as a reminder. Last week a customer contacted us out of the blue looking for a Signature Guitar for his son. He seemed informed, convince and prepared, so we arranged to next-day ship a beautiful Brazilian/cedar Stand Up Signature to his home in Long Beach, COD cash/certified funds. This is a pretty common way to sell a guitar, and we have done this many times over the years.

Within two days we got the certified check and about the same time he called us to say his son loved the guitar, couldn't put it down. He loved the guitar too and did we have another? I did have one Brazilian spruce Stand Up remaining, the last one, and he checked out the pictures on line, and we negotiated for him to buy this second guitar. He worked me for a discount, and in view of the situation I agreed, and we sent the second guitar, same deal.

Larry and I debated over the security issue, and I decided that in view of his knowledgeability, his seeming genuine appreciation of the first instrument, and even the fact that he asked for a discount (who wouldn't) we should go ahead and sell him the second (and last) guitar. After all, tax time is coming. We concluded that the only real risk would be that the certified checks would be counterfeit.

I'm sure you have already guessed the ending. The certified checks were counterfeit! Jeesh! I've always operated on the hypothesis that the traumas that life serves up are never what you expect, that they come from some place you're not looking. Well, this time I was wrong.

The peculiar part of this to me is that this is a lot of trouble just to get a couple of guitars. Forgery is a serious crime, FBI territory, and there are many other scams that could net such a conspirator a much better cash position. I suppose he can put these on ebay, but fencing classical guitars must pay about one penny on the dollar. The only way to get the real value out of the instruments is to play them, and it seems that that's what he and "his son" were doing, all the while scheming a significant five-figure rip off. And, he even talked me into a discount! Why?

Nothing like this has happened to me before. My dear wife Roberta, God bless her, has often asserted that I am naive about security, and at this point who could argue? Maybe this is the most troubling part of the story. I like being naive, it gives me time to focus on other things, like guitars, music, family, the garden. In retrospect I see a number of warning signs, and I chose to over ride them. To be sucked into a new class of worry offends me. Maybe it's a sign of the times, but I still assert my right to be part of the "up", not part of the "down".

This guy could be reading this blog right now. What a turkey. I've tried to imagine what it would take for me myself to pull a stunt like that, but I just can't. I've got a lot of faults, God knows, but I just can't conceive of getting any joy or satisfaction out such a scam. I enjoy a good heist movie as much as the next guy, but this one is pretty tawdry.

He should just send the guitars back and walk away. At this point, if I get them back I think I'll give them away to some student, someone who deserves them. It would even be better to go on a pilgrimage and throw them into the volcano. Then, maybe the gods of doom would back off for another day.

The two guitars are Hill Signature Stand Up model guitars, #2687 and #2684. Both are Brazilian rosewood, one with spruce top, one with cedar.The customer ordered them by phone and paid COD with counterfeit certified checks seemingly from Bank of America. The checks were very convincing to me, but the bank was not convinced.

Of course the phone numbers don't work. Of course, avoid this person.

If you hear anything about the guitars or Mr. Silk, please contact us, or contact local law enforcement. If someone offers the guitars for sale cheap, buy them and I'll buy them back. Or just buy em and enjoy em, but please let me know.

Postscript, 3 days later: A few things. First, I talked with the REAL Jonathan Silk, and he is a very nice guy now living in Netherlands. He was a Professor at UCLA, but is now working near the Hague. He had nothing to do with this. I don't know our con man's real name,but I'm guessing this isn't it.
Second, I've contacted several law enforcement agencies, and even a private detective at $90.00 an hour, and none of them have done anything at all. It seems we're on our own out there. And third, Traveler's Insurance, my soon to be EX insurance company, says they sympathize but there is a tiny exclusion carefully written into my policy, so coverage is denied. They are very good at writing exclusions it seems. They are also good at taking money year after year, tens of thousands of dollars, and providing no service. This is at least as frustrating as the original rip off, in fact in a way it feels worse.
Nevertheless, the guitar community has been amazing, and indeed reminds me why I'm in it. It is magnificent to hear from friends and strangers alike, and feel how close knit we are in fact. So good, heart is not lost.
Posted by New World Guitar Company at 11:06 AM 5 comments: Links to this post 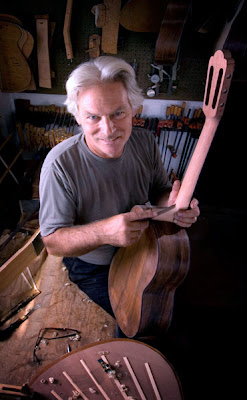 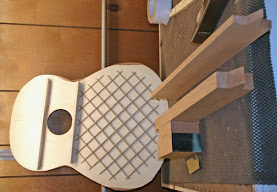 Posted by New World Guitar Company at 12:49 PM 2 comments: Links to this post