This is a smaller-bodied parlor-size Birdseye maple Signature with lattice bracing ready just in time for La Guitarra California show this weekend.

It's an incredible package featuring the Hill double top with European spruce on the outside, western red cedar on the inside. The Birdseye maple is striking and beautiful.

This guitar has been fitted with new custom Graf Torres tuners which are exclusively made and unavailable to the market.

The sound is powerful, complex and beautiful.

Come to Santa Maria and try it. This guitar is not going to be available for long.

More photos and specs in the Showroom.
Posted by New World Guitar Company at 3:12 PM No comments: Links to this post

These smaller-bodied shorter string-length guitars are designed for the smaller player, player with smaller hands, or restricted reach.

Available with a western red cedar or European spruce soundboard, these guitars are destined to have a wide following as they become available.

We should have stock on these instruments early next year. Please contact us to get on the waiting list, so we can let you know when they arrive.

See more photos and specs in our showroom.
Posted by New World Guitar Company at 1:37 PM No comments: Links to this post

Terrific line-up of performers at this show. If you're not going, you should consider it.

8:20 -- CARLOS BARBOSA-LIMA and BERTA ROJAS - The Maestro of Brazilian music
and The First Lady of Guitar! A spectacular duo!

6:00 -- MANUEL BARRUECO! - The esteemed Maestro in the Central Coast performance!

Posted by New World Guitar Company at 10:09 AM No comments: Links to this post 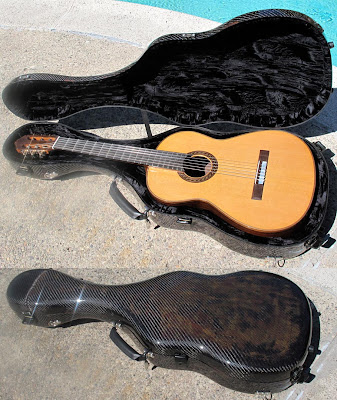 We now offer Accord cases as an option for your guitar. They are very light weight and do a great job protecting your guitar.

Accord cases have been a premium choice for musicians all over the world who want to make their life easier. The reason for that is that Accord cases are built of advanced composite materials which guarantee a truly unprecedented weight/strength ratio. Accord uses unique technology to achieve lightness, strength, instrument safety and reduction in size. Furthermore, Accord's production process is based on gradual case reinforcements with Kevlar, depending on Accord's customer's demands.

Hand made of finest quality fabrics and fittings. Accord cases are designed to be both beautiful and extremely protective. Within the artisan constructed carbon shell (twice the strength of any conventional material of the same weight), is a dual density foam suspension system to totally isolate the instrument from any impact.

Posted by New World Guitar Company at 11:49 AM No comments: Links to this post

The first lattice-braced production Signature has been sold already, but the second one is now available for whoever wants it. See photos in the Showroom.

If this guitar hasn't sold, it will be available to try at La Guitarra California in Santa Maria, CA in a couple of weeks...or come and visit the shop and try it now.

These 2 guitars are fantastic.
Posted by New World Guitar Company at 3:11 PM No comments: Links to this post 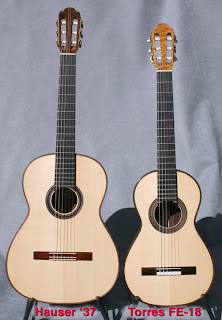 I first made copies of Torres FE 18 (1864) about a year and a half ago, hoping to make a small but concert-quality guitar for gifted kids to play. Frank Longay was pushing me to come up with something for his Suzuki prodigies. I looked through the Torres archives and picked the smallest one I could find. Using the Torres design relieved me of a lot of responsibility in coming up with a body shape etc., and Torres' eye for shape is perfect.

I found the dimensions in Romanillos' book, as well as a very tiny photograph. I blew up the photo until it matched the dimensions, cut it out with scissors, made the necessary assembly forms and built the guitars. I did four instruments in a variety of string lengths, all Indian rosewood and spruce, and I used the rosette and purfling from my preexisting 1856 Torres, a guitar and model that I have loved since first sight.

The resulting guitars were very fine musically and esthetically, credit which should go straight to Torres. The body is not much different in size from a Panormo, but the overall sound is very complete, not at all an "antique" sound. The guitars didn't turn out to be ideal proportions for kid students, but more suited for any person who wants a smaller instrument, easy to play and hold, with a full, rich concert sound, to spare.

About a year ago James Westbrook, a guitar historian, author and collector from England stopped by the shop for a visit, and he asked me "What's new?" I pointed out the FE 18 copy,"That's new", and he was looking at it saying "Well, maybe, but it's a little small and some details are not quite right."

I started to explain to him that yes, it was really correct because I had researched this and that, and James said, "Well, I own the FE 18". So that shut me right up, and I had to rewind the whole conversation and ask HIM to tell me what was up, not the other way around. 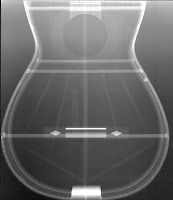 The long and short of it is, he went home to England and took an exact body tracing, detailed photos, xrays and even took a CAT scan of the guitar, and sent all of this information to me. He even offered to send the original Torres to me to study. This just seemed like a too much liability. Better I work on it here for awhile, then go to England and visit it to get more nuance. 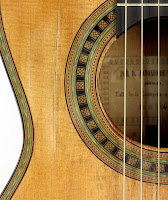 I set about getting the rosette and purflings made according to to the photos. I didn't want to do this work myself because it is too time consuming, and I was guessing that I would want to make many of these guitars, so I sent the pictures and measurements to Japan to have them made. This took a while, but when they finally arrived they were excellent, and it was time to proceed.

I made another batch of four with the new information I'd gotten from Jimmy, the refined shape and the new decorations, but each guitar with little differences; 640 mm, 630 mm, 650 mm, maple, Indian rosewood, Brazilian rosewood. The Brazilian rosewood one was made with wood salvaged from an 18th or 19th century desk. I also used some Spanish cedar that I had salvaged from a gold rush era central California bar top, worn down where the beer glasses had been slid over the years, complete with bullet holes. I also had a hundred-year-old German spruce top, so with these old, old materials this guitar echoes with ghosts from two centuries.

All of these guitars are fantastic. The original Torres was maple, and my maple version is really adorable. They are all adorable. They look great, the Torres body shape is- as expected - perfectly proportioned. The sound that comes out of this guitar is amazing, it completely defies expectations because of it's size.

The Brazilian FE 18 sold right away, but I still have the maple and the Indian rosewood instruments. I haven't showed them much yet, but I will soon, and I don't think they will last long. I'll probably make more, sooner or later, when these are gone, but it may take a while. It's hard to imagine getting better results.