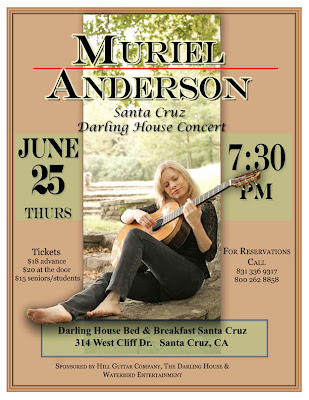 One of America's finest guitarists, Muriel Anderson returns to Santa Cruz for an intimate evening concert at the landmark Darling House. Muriel will be playing one of Kenny Hill's Signature model guitars. Limited seating.

Muriel Anderson's music encompasses many genres on both guitar and harp guitar. She was the first woman to win the National Fingerpicking Guitar Championship and was also awarded a bronze level for classical in the 2009 Acoustic Guitar Magazine's Players Choice poll. Her audiences are delighted with a range of music from international, folk, classical, jazz, pop, and bluegrass. She has been composing since the age of six and has published works for guitar and orchestra, voice, and solo guitar. Muriel has published several instructional books and videos and tours extensively. She is also the founder and director of Music for Life Alliance charity, and is the host of Muriel Anderson’s All STAR GUITAR NIGHT.

Posted by New World Guitar Company at 10:55 AM No comments: Links to this post