BEN LOMOND -- Kenny Hill oversees a sophisticated global operation that manufactures classical guitars on two continents, with materials from around the world, to sell to customers in several countries -- and he does it all from a converted house among the fog-shrouded redwoods of the Santa Cruz Mountains.
"World headquarters in Ben Lomond!" Hill says, marveling that his complex enterprise is centered in a place better known for logging than logistics. 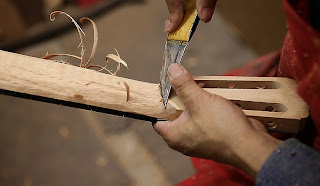 Hill is the founder of Hill Guitar, an outfit that makes about 150 top-of-the-line instruments a year in a small plant with six workers just down the hill from world headquarters and an additional 50,000 a year that he has designed for more modest budgets
in a factory halfway around the world in Guangzhou, China."Our business is as complicated as Honda or Mercedes," Hill says.

When I set out to explore manufacturing and its future in the Made in the Bay Area series, I didn't expect to be making a trip up the winding road from Silicon Valley to Ben Lomond. The series has looked at how rising costs in China, increasing automation in the United States and growing globalization have made the decision about where to produce goods more complicated. And it turns out Hill's operation is an ideal illustration of another byproduct of those trends: More than ever, companies need to look at individual products when deciding where in the world they can be most efficiently made.
Hill makes his most expensive guitars close to home, where he can literally take a hands-on approach with the meticulously crafted instruments. In China, he relies on an assembly-line operation in a factory of 200 workers to provide economies of scale for guitars that sell for much less than his Ben Lomond models. And he's helping launch a plant in Oxnard that will produce guitars priced between the Ben Lomond and Chinese models and that require a level of hand-crafting greater than the Chinese products and less than the high-end guitars.

Posted by New World Guitar Company at 1:15 PM No comments: Links to this post