Congratulations to the Cincinnati Winner!

We recently donated an Estudio Model Guitar for raffle to the College-Conservatory of Music at the University of Cincinnati for their summer classical guitar workshop.  Thanks to Jonathan Marshall, one of our fantastic dealers at Jonathan Marshall Guitars, there is a winner! Congratulations! 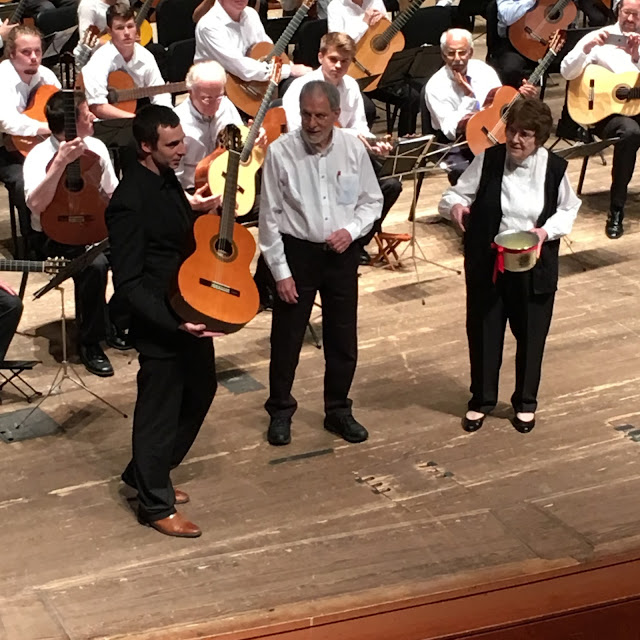 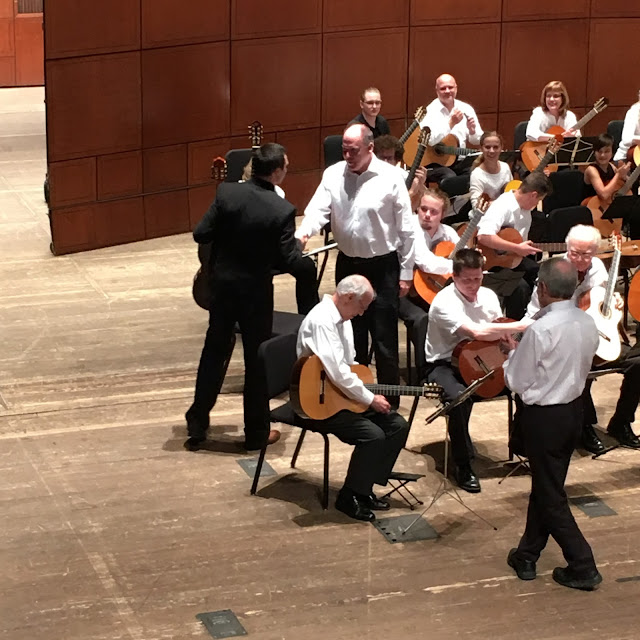 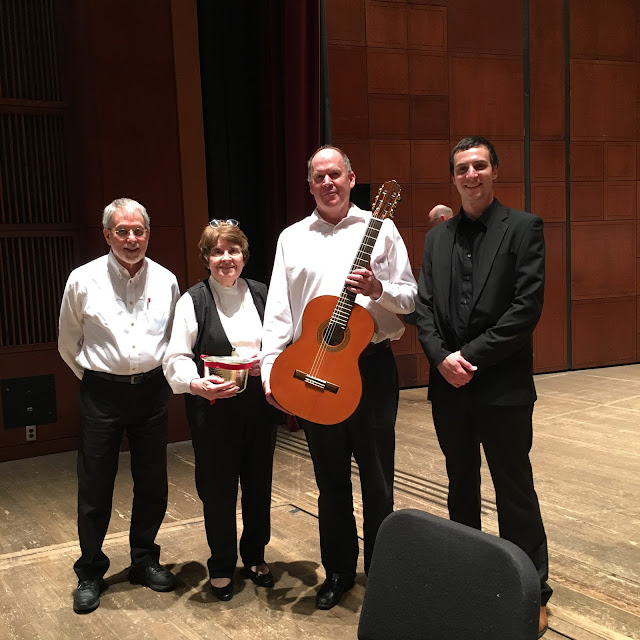 The 25th International Guitar Festival in Iserlohn, Germany is taking off on July 17th- 24th!  Kenny is able to attend most every year, and each year is different and more exciting than the last. Thomas Kirchhoff and Dale Kavanagh do such an amazing job putting this event together, and this year they have some truly wonderful artists coming to perform and teach.  If you are going as well, please stop by and try some Hill Guitars, like the one featured here!

See you in Germany!
Posted by Hill Guitar Co. at 10:45 AM No comments:

Hill Guitar Gets a Visit From GeekSpeak! 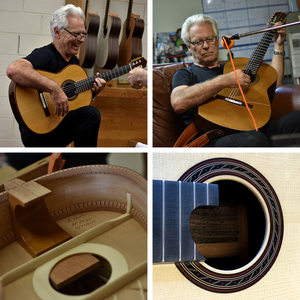 Lyle Troxell is the host of the radio program and podcast Geekspeak, he’s been doing it for decades. It’s a show that is mostly about technology and social media subjects, but out of the blue last month he called me and asked to do a shop tour and interview. I guess this is official acknowledgment that I am a guitar geek. We just did it the next day. It was very nice getting together with Lyle, who I have known for many years, since he was a kid, the son of my old friends the late Peter Troxell and wife and mother Dianna .  Peter and I worked together in the mid 90’s when he was station manager and I was program director at KUSP FM in Santa Cruz. Peter was a very valuable influence on me until he passed away in 2004, and he still is.

Lyle has a very sharp and curious mind, and it was a pleasure to speak with him. Here’s a link to that interview: http://geekspeak.org/episodes/2016/06/08/
Posted by Hill Guitar Co. at 12:53 PM No comments:

In June we attended and exhibited at the annual Guitar Foundation of America convention in Denver. It was a great show! The location was one of the best I’ve experienced, the energy was very high, and the music was impressive and inspiring.  I could go on and on, and maybe I will later, but for now I want to mention our newest Hill Guitar playing artist, Mary Jedynak.

At this show I brought my own personal guitar, the one that I’ve been using for gigs and practicing etc. for the last year. It’s a bit scratched up and all, but it sounds and plays very well, and it has all of the tailor made features that I’ve been working on to make guitar playing more comfortable and exhilarating —  a 640 scale Signature Model guitar with wedge tapered body, wide arm rest,  as well as all of the other design features of the Signature Model, and oh yes, the Barbera pickup.

Mary was spending a lot of time and attention trying guitars from the many many luthiers exhibiting, and she came around a few times to try out this guitar. It fit her very well, she’s a delightful player, and in the end we made a deal and she took it home. She seemed very happy, and me too.

It is most satisfying for me to place a guitar in the hands of a young and developing player. It’s a good feeling to realize that the instrument can be a part of a young musicians growth and inspiration. I try to make instruments that help the guitarist play better and to really enjoy the time spent with the guitar, performing, practicing or just fooling around. Mary is pursuing her studies with Sungmin Shin in Rochester NY, and she’s going to be working hard. Additionally she is playing in senior living homes a few times a month, playing in their guitar ensemble and writing for guitar and other instruments.

We were also fortunate to place several other instruments with players from all over. It all happened so fast I didn’t get photos and details, but I’m excited to have fine and dedicated players working our guitars across the country and around the world.

In the end it feels like this guitar was made for Mary. I hope she continues to enjoy it as much as I did, to grow with her music, and and continue to share it with the world.

Posted by New World Guitar Company at 12:01 PM No comments:

Last week we finished this pictured custom Crossover Performance Model instrument for Rick Ellis from San Francisco. As I was playing it and handing it off to it’s new owner, my comment was that this is the new paradigm for a crossover instrument. For Hill Guitar Crossover this is the new standard. 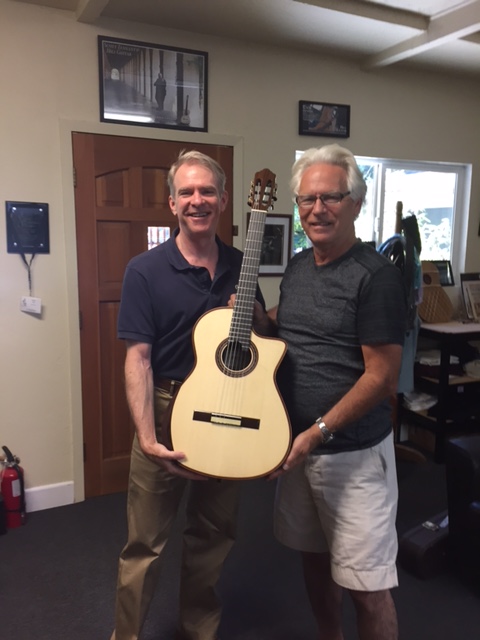 In the decade 2000s we made quite a few Crossover guitars. I think of it as a nylon string guitar aimed at players accustomed to steel string acoustic or electric guitars. Most of those players (then and now) had never played a fine classical guitar, only commercial grade instruments carried as token nylon in general guitar and music stores. There was a trend of electric going acoustic as the “unplugged” movement, and I saw a further opportunity of acoustic going nylon as a further move toward sensitivity. Our Crossover guitar fit the bill. It was basically a normal size classical body with a cutaway, a narrower 48 mm neck. and an arched fingerboard. The decorations were a little more Americana than European, but otherwise the construction was quite traditionally classical.These guitars went over very well, and occasionally one will still pop up here or there, and are still very well loved.

But back then, as the popularity was growing, some big name steel string companies tried developing their own crossover style instruments, and they nearly killed the market. I won’t name names, but I have long contended that nobody can make excellent steel string guitars and excellent nylon string guitars. They’re just different beasts. And in this case I was 100% correct. Those guitars were lumps of wood, no sparkle, no vitality, the only output a nasal buzzing coming from the pickup. Sorry, but it’s true.  As they rolled out their nylon string guitars, loyal fans of their brands tried them out, got no love whatsoever from the guitars and said — never mind, I guess nylon sucks. The nylon generation never had a chance, because that market was tainted with mediocre or bad instrument that never really inspired the musicians. I haven’t paid attention to what has happened to those instruments since then, but interest in Crossover guitars within our company really waned. It didn’t really matter to me because we’ve been quite busy enough making concert classical guitars, but as a participant and observer of the market I found that interesting and ironic.

Now, starting at the beginning of this year, a whole new set of custom orders have come through, and many of them variations of the Crossover. Orders and interests do seem to come in waves, but this is a crazy strong trend, from nothing to many in just a few short weeks. My theory is that the quelling effect of all of those disappointing instruments from the 2000's has finally passed through, and that serious musicians and guitar aficionados are again wanting to having a beautiful nylon sound available to them, whether on stage, in the studio or at home. 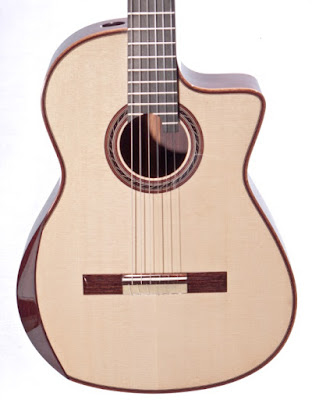 Nylon strings will never play exactly the same as steel strings. There is only half the tension on the strings, much greater flexibility, and the design of the neck and the top have to take that into account. And for me that is the beauty of it. It’s very sensitive, has so much color and dynamic possibility, and is so user friendly to play.

This particular guitar has rosewood body with spruce/cedar double top, 640mm string length, 12 fret neck with a 48mm (1 7/8") nut width and a 16” radius fingerboard. The body has a sweet little cutaway, one sound port, a wedge tapered body and a wide beveled armrest. Add to this a beautifully natural sounding Barbera pickup and you have a new standard for a Hill Crossover Guitar.

Well, almost. At this point we are only making these guitars as custom orders. Our production is limited and we have a lot of other things to do. But it’s interesting to me, the new appreciation for nylon strings beyond the realm of just classical guitar, and I really like the unique characteristics that are coming out of these instruments. I look forward to hearing all kinds of players making good, new music on them.

Posted by New World Guitar Company at 10:46 AM No comments:

As part of Santa Cruz Museum of Art History Art Works Artist-In-Residence Program, Lanier Sammons will be putting one of our Hill Guitars on display from July 1st to July 25th.  This guitar will be an incomplete guitar where you are able to see the beginnings of the building of our Performance Model Guitar, as well as an open back to view the interior details. 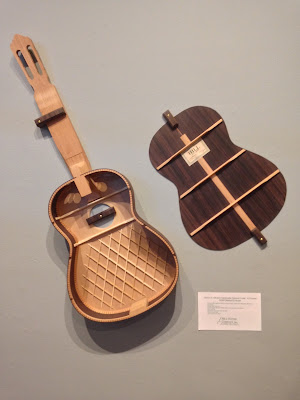 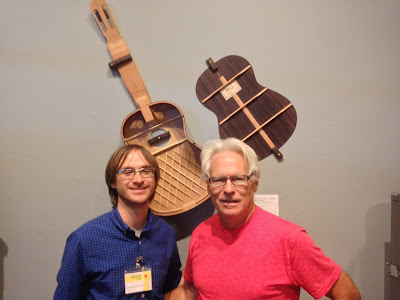 Lanier will be working on five participatory composition and recording projects during the course of his residency.   These projects will bring visitors to the museum into the midst of the creative process and produce new musical works that reflect our collaborative experiences.  Lanier will be in the Museum at these times if you are interested in participating: