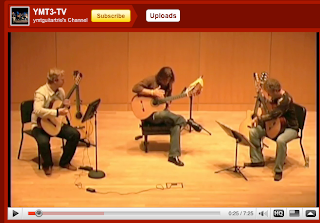 New video postings from Hill Signature player Scott Morris' YMT Guitar Trio got our attention today. Here's a link to a their pages.

We add information about Hill Guitar players in the PLAYERS section of the website from time to time.

The YMT Guitar Trio is a collaboration of guitarists Jeff Young, Scott Morris and Steven Thachuk. Each member brings years of diverse musical experience to the group. Performing music as varied as their individual backgrounds, their repertoire includes original works as well as Brazilian, Miles Davis, Michael Jackson, Radiohead, Zappa & Led Zeppelin - to name a few. Their debut concert tour takes them to venues and festivals throughout Europe and the United States beginning July 2009.

Y: Jeff Young was the lead guitarist for Megadeth from 1986-1988, performing on and touring for the multi-platinum album So Far, So Good... So What! He toured with, recorded and produced Badi Assad from 1996-2000. Their recording Chameleon went to number one in Europe and topped the JAZZIZ Readers Poll for "Best Brazilian Album." Jeff also served on the teaching staff at Musician's Institute/GIT in Hollywood, California.

M: Scott Morris gave his New York recital debut at Carnegie Hall in 1998 and has appeared as a soloist throughout North America, Europe and Asia. He has recorded for Eroica Classical and Centaur Records, working with longtime Neil Young producer Niko Bolas. He has also performed and recorded with artists as diverse as Steve Perry (ex-Journey) and Martin Chalifour (LA Phil Concertmaster).

T: Steven Thachuk is known as one of Canadas most outstanding and versatile guitarists consistently challenging the nature of the instruments repertoire and boundaries. Playing both traditional classical guitar and a steel string instrument he has appeared in recital, as a chamber musician, and soloist with orchestra throughout North America, Great Britain and Europe.
Posted by New World Guitar Company at 12:20 PM