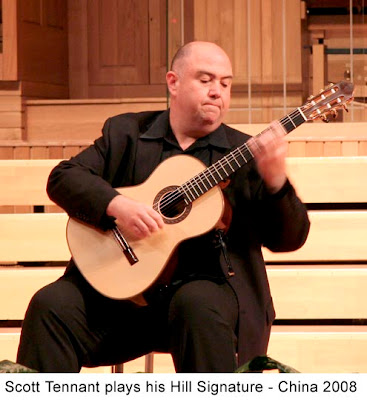 I've known Scott Tennant since 1995. I met him at the GFA festival in Northridge, when he came up to my display table, picked up my guitar, and blew my mind.

Scott can really play. His right hand has a strength, suppleness and confidence like no one else. His left hand moves with perfectly natural speed and accuracy, and his musical ear and taste are exquisite. As a founding member of LA Guitar Quartet, as a virtuoso soloist, and as a teacher Scott's playing has touched not just me, but tens upon tens of thousands - or millions of people around the world. He's smart, and funny, and he has exposed me to all sorts of music that has added to my repertoire and changed my several times over.

So, last year when he contacted me wanting a guitar, I was thrilled. Over the years I have shown him instruments, absorbed his comments, and now with the Signature model it seems I've made some instruments that grabbed his attention. I took him 2 or 3 guitars to try out, he bonded with one, and the next morning he took off with it on tour of Russia, China and Japan, both with the quartet and as a soloist.

For some time now Scott has been real wrapped up with his Daniel Friedrich guitars, and no wonder. Friedrich has been making stellar, world class guitars for decades. They are some of the most prized instruments of any living builder. Now that he has chosen to include a Hill Signature guitar as a working axe I'm proud, and excited to hear him playing on it as much as possible. I absolutely love these guitars, but then I'm kind of biased. When an artist of Scott Tennant's stature chooses a Hill Guitar and plays it so beautifully, I am very, very happy. We must be doing something right.
Posted by New World Guitar Company at 11:03 AM 1 comment: Links to this post

We at Hill Guitar are delighted to add Sylvan Music in Santa Cruz to our esteemed dealer group. I've known owner Al Markasky for decades, as long as Sylvan has been around. I've watched the store grow from a tiny repair and sheet music operation to one for the strongest retailers and service centers in acoustic guitars anywhere. They've got an remarkable selection of steel string instruments, old and new, and they have a respectable collection of classical guitars. With the addition of Hill Signature instruments and New World Guitar Player series and Estudio series, their selection got better!

The first Hill Signature guitar that went there lasted less than a week. This has been a trend all over, keeping the Signature Models in demand, and in short supply. Production of these guitars is very limited. We delivered a cedar/Indian rosewood Signature Model (double top) to Sylvan Music just yesterday, and if your interested in such a thing you should go try it, because it probably won't be there for long. There are very few of these instruments available for sale at this time, and demand is strong.

Although we are in the same region, Sylvan Music and Hill Guitar have never tried to work together, but I think this is a good collaboration. They are close to the University, close to downtown, and on a main route in and out of Santa Cruz, and they have so many instruments and accessories to look at they are a real destination. Playing Hill guitars in the context of many other instruments gives you the chance to compare, and hopefully get a sense of what is so good about our guitars. Sylvan has a nice sound room dedicated to just classical guitars, so the acoustics and privacy are ideal for trying out guitars.

So I'm very happy to finally hook up with our home-boys at Sylvan Music. You should visit them soon!